This research is particularly focused on potential biofuel applications for the cultivated native grass Panicum virgatum (switchgrass). Examples of recent projects include:

Mapping Agro-Climatic and Land Suitability for Switchgrass Production in North Dakota: Land suitability was determined as a function of agro-climatic factors governing switchgrass establishment, potential biomass yield, and long-term land use practice in North Dakota. Thresholds were defined for agroclimatic factors limiting switchgrass establishment and productivity. The ALMANAC crop model was used to simulate the potential yield of switchgrass at different locations, then simulated yields were interpolate at the state level. A multi-criteria analyses approach (MCAS-S) was used to produce a switchgrass suitability map for North Dakota. 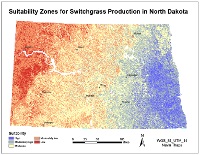 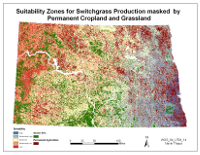